2018 FIFA World cup Pre Quarter matches over today, with the teams reduced from 16 to 8. From the 8 top quality matches at Pre Quarter knockout phase big guns like Argentina, Spain etc knocked out of the tournament. But the in-forms teams like Brazil, France, Belgium are through to the quarter final round.  The real thrill begins at Russia !!!

Which are the teams qualified for quarter final (Round of 8) round in 2018 FIFA World cup ?

But teams like Argentina, Portugal, Spain, Denmark, Mexico, Japan, Columbia and Switzerland could not qualify for the Quarter final round of 2018 FIFA world cup.

Well, As most of the fans awaited Brazil and France made through to the Quarter round. Their opponents will be Belgium and Uruguay respectively.  Neymer has to continue with their current form to beat their opponents in round of 8. Brazil beat Mexico 2 – 0 in their pre quarter game.

The host country Russia living up to their fans expectations also qualified for Quarter and they beat 2010 world champion Spain in the pre quarter round. They will take on in-form Croatia Knockout Round of 8 quarter match.

Belgium Vs Japan match was a top class in the pre quarters. After being down with 0-2, Belgium came back strongly and finished the game 3 -2, which includes the injury time goal at 90+4′ minute. Belgium is biggest contender for the title for 2018 FIFA world cup.

Sad news at pre quarter was Cristiano Ronaldo side Portugal had to face a defeat against Uruguay 2 – 1 who has one of the best striker in the world Suarez. Along with Kavani as anticipated Suarez made match changing moves. Kavani’s double blow spoiled Cristiano Ronaldo’s world cup dreams. Another set back was for Lionnel Messi who this time could not get his world cup dreams fulfilled. Argentina had fighting pre quarter with France and youngster Mbappe 2 goals sealed an amazing 4 -3 victory for France in the pre quarter round.

Keeping with the expectations Switzerland made to the Pre Quarter round 4th time in the world cup, but they could not go past the resilient Sweden. Sweden had a wonderful game and won the pre quarter match against Switzerland 1 -0 to secure their Quarter final berth. England, who got a defeat against Belgium in the last group stage came back strongly and beat Latin American Powerhouse Columbia on their Pre Quarter round (Round of 16). Columbia without James Rodriguez fought well, but at penalty they could not hold England. This is first time England won a match in penalty shootout at FIFA world cup. England will be facing Sweden in the quarter finals of 2018 FIFA world cup. 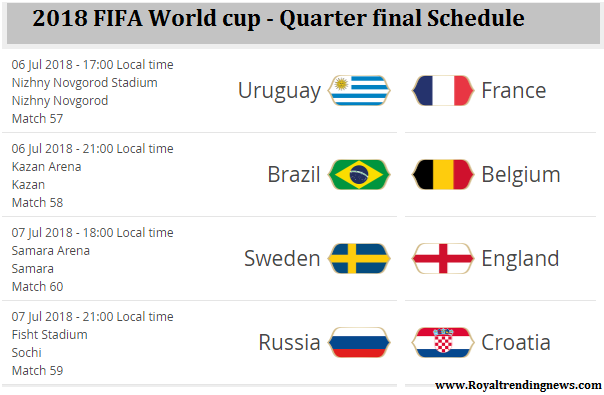 Which best teams eliminated from the 2018 FIFA World cup in the Pre Quarter stage ?

The exit of Argentina and Portugal is the biggest talk in the Football fraternity. No one expected that, but the dreams of Messi and Ronaldo still stay as dreams. The other big gun who are eliminated from Pre Quarter stages of 2018 FIFA world cup are 2010 world champion Spain. But Russia were too strong at penalty shoot out to beat Spain in pre quarter stage.

One team who will be going home with their head high is Japan for the amazing match against Belgium. If it was not belgium, Japan would have been in the quarter finals of 2018 FIFA world cup.

Teams like Switzerland, Columbia, Denmark and Mexico tried their best on the pre quarter stages, but inevitably eliminated from the 2018 FIFA world cup.